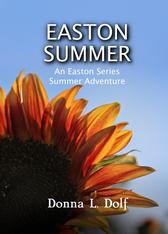 Easton Summer is the story of three pre-teens from troubled homes.

Jason Bonham, Eric Lane and Kati McClellan, affectionately known as the angels, have known personal tragedy. The three are thrown together at the Sanders Ranch in Easton, California where they are mentored by a young woman, Shelley Sanders, and her parents, Michael and Marian Sanders.

Jason Bonham is 12 years old. Jason is small, with black curly hair and large dark eyes rimmed with thick black lashes that makes his brown eyes seem almost black. Jason is so, so moody but has the most beautiful smile when he chooses to use it. Jason is the joker of the angels and loves to play his guitar. Jason came to the Sanders Ranch after his parents were killed in an auto accident. His Aunt Carrie was caring for her four children and could not take on another child. Jason was looking for a place he could call home and love but Jason was doing his best to cause trouble.

Eric Lane is 13 years old, blond haired and blue eyed with a devilish gleam in bright, intelligent eyes. Eric loves animals and reading. He came to live at the Sanders Ranch when his grandmother became ill and couldn't take care of him. Eric felt abandoned and was quietly rebelling.

Kati McClellan is a trim little girl, with long, straight brown hair that hangs to her waist, with sharp brown eyes holding so much pain. Kati stands taller than Jason but not as tall as Eric. Kati is a wiz at computer games. Kati’s parents left her in the care of Marian Sanders when her father received the ultimate promotion that was “too good” to refuse. Kati’s parents were traveling in Europe somewhere and she had no idea when they would return. Kati is 13 years old and she was proving to be a bit of a handful.

While spending the summer together and guided by Shelley, who is working through her own low self-esteem, the angels explore Easton, make new friends while solving a variety of puzzles and mysteries. They work through their individual anger, grief and loneliness bonding and coming to terms with their situations.

They meet a deputy sheriff who helps the angels and Shelley solve the South West Avenue mystery. They meet homeless Pete and Robert the bully and learn not everyone is what they seem to be.

Easton Summer highlights the angels’ explorations throughout Easton, swimming at Millerton Lake, riding bikes to Cherry Auction and caring for farm animals. They spend time in the kitchen making pies and days outside tending the garden. They chase escaped chickens and mourn the loss of stolen goats.

The angels learn to work together while learning about friendship and love while making a home during the long, hot Easton Summer.

Easton Summer was published on Amazon.com on April 14, 2014, and is now available for purchase in ebook, paperback and hardcover formats.  amzn.to/2aZkMyG